We are delighted to announce that we’ve reached an incredible milestone today—someone has just bought the millionth copy of Things!* We have some great gifts to celebrate the occasion, and we’ve got some news to share about Things’ future.

First and foremost we want to thank every one of you. Because it is you who have made all of this possible. When we first set out to build Things, we were making a tool that we would love to use, uncertain if it could become a viable long-term business. After all, few people seemed to take “to-do list” apps seriously at the time. Fast forward to today, Things is available on the Mac, iPhone and iPad, and we’re able to sustain a team of 11 people who care deeply about making beautiful software. We love productivity, and being able to work together every day on a project we care about is an incredible privilege for us—and it’s only possible because of you.

But there is a deeper reason we want to thank all of you and that is for the incredible feedback you’ve sent us over the years. Your encouragement and passion for productivity has inspired us from the beginning. It is deeply humbling and hugely motivating to see that so many people are more productive each day because of Things.

This is the number one reason that keeps us going. We have the highest respect for our users, and in everything we do, we want to make the right decisions in that light.

It hasn’t always been a smooth ride, however. Many of you will remember the struggles we had building our cloud sync solution. We had to embark on two different approaches, and learn the hard way how not to do it, before finally settling on what would become Things Cloud. If we’d known at the beginning how long it was going to take we might have been deterred. But even today, many apps are still struggling to deliver a stable and fast sync, and even Apple has found this to be a hard problem. What had once been Things’ achilles heel is now one of its most stellar features: when it comes to sync, Things has got you covered like nobody else. Again, our thanks go to you—because you stuck with us during that time, and believed we would come through.

Today marks an important milestone for Things and you’ve helped us get here. We want to celebrate by giving you a chance to win some new hardware—and since we make Things for the Mac, iPad and iPhone, what better gifts could there be? Update: All gifts have now been awarded and the contest is closed.

Participating is easy, here’s how:

That’s it! We’ll randomly choose the winners on December 25th (Christmas Day) – make sure you retweet before then, and best of luck!

A Million Things Yet to Be Done

If you’ve read our September blog post, you’ll know that ever since shipping Things Cloud, we’ve been hard at work on what we’ve somewhat shyly implied is “the next iteration of Things”. Well, today we’d like to reveal what exactly this means: 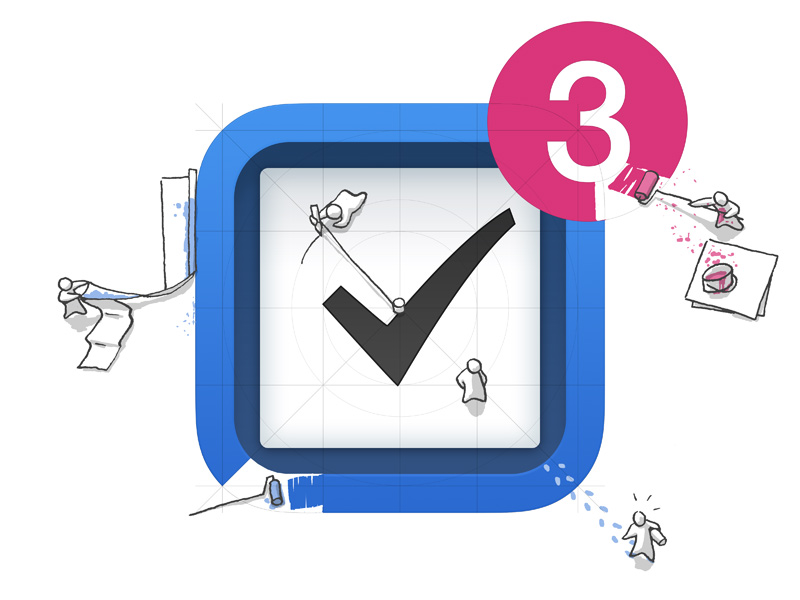 For a little over a year now, we’ve been working on Things 3, which will be available for the Mac, iPhone, and iPad. It introduces a fresh new visual style, a revised user interface, more structure for your lists, and an array of great new features that are designed to make you more productive. We’ve revisited many areas of the app that have been neglected in the past, and renovated much of our codebase. It’s the most ambitious update we’ve ever undertaken.

Now, we know that the question on everyone’s mind is when this will come. We had actually hoped to show you a preview before the end of the year, but we’re sorry to say that the apps are just not ready yet. While we understand the desire for a concrete time estimate, they are notoriously hard to get right. So instead, we’ll make good use of our status board and keep you updated on the progress of development, from now until Things 3 ships.

With respect to iOS 7 we were faced with a pretty straightforward decision back in June. Apple had just unveiled iOS 7, and we were knee-deep in the development of Things 3. The decision was to either continue development of Things 3 as planned, or to halt development, revive the old Things 2 code, and ship a half-hearted re-skin of our app. It’s clear now what we chose to do. This means that you’ll have to stick with the Things 2 design a bit longer, but it also means that Things 3 will ship much sooner than it would have otherwise.

We think you will love Things 3—we have all started using it internally, and we couldn’t be more excited. Please sign up for our newsletter or follow us on Twitter so you’ll know once we’re ready. Until then, we hope you’ll keep being as productive with Things as you’ve always been.

Thanks again for all your support throughout the years! Happy holidays, and see you again in 2014!