Bartek Bargiel is an amazing person. He - a professional Java developer - became interested in the Mac and decided to learn what developing for the Mac is like. Since he was interested in David Allen’s GTD methodology too, he created iGTD, his very own task management application. iGTD quickly became the most popular free GTD-style task management application for the Mac. 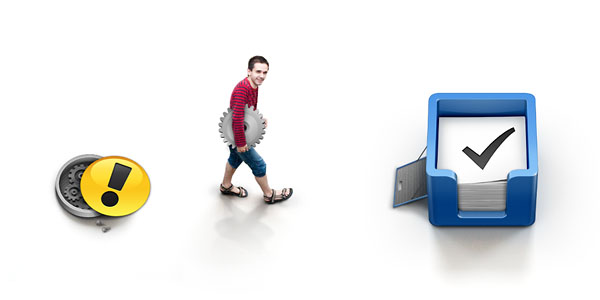 Early on, we were very impressed by what he did. Even though he had a demanding day job, he was doing this all on his spare time. Yet iGTD had more features than Things did! Imagine our surprise when we discovered that Bartek was working for a company in Stuttgart - the very city where our office is based! We had to meet him...

It turned out that Bartek was actually working remotely from Poland, so meeting him wasn’t that easy after all. However, he managed to stop by our office a few months later. The guy who would eventually step through our front door turned out to be one of the nicest, most likable people you could imagine.

But before we met in person, Bartek let us know that he liked Things so much that he switched to it as his main task management application. And that he also decided to stop developing iGTD and recommend Things to his users instead. (Insert sounds of heads exploding)

We were speechless. And I don’t mean this as a figure of speech. We were literally speechless. Of course we wanted him as a member of Cultured Code! When we finally met him, he told us that developing iGTD completely on his own had become somewhat of a burden and that he would much rather work together with a team. What a wonderful coincidence. We knew we wouldn't let him go, ever!

Bartek has since decided to quit his daytime job and come join us instead! Right now, he is in the process of helping his successor at his old company get up to speed.

So, I am very happy to finally be able to say this: Welcome Bartek! We are thrilled to have you!

Once it became apparent that Bartek would continue to work on Things instead of iGTD, we felt quite responsible for existing iGTD users. We asked Bartek what we needed to do to make Things a viable option for iGTD users. I'm pleased to say that Things 1.2 is the result of us taking his advice. He also requested that we give free Things licenses to everyone who donated to iGTD, and we were very happy to oblige! Everyone who donated will receive an email with one or more free Things licenses, making sure that the value of licenses will exceed the amount of money donated.

We are releasing our Things 1.2 “Welcome iGTD” update today. Our main goal for 1.2 was to bring keyboard support to a level iGTD power users would expect. One of the famous features pioneered by iGTD and subsequently copied by other task managers is the so-called “F-key trick”. For many supported applications, it allows you to quickly create a task with information already filled in for you. For example, in Safari, a task is created with a link to the currently viewed page added to the notes section of the to-do. With the help of Bartek, we have now integrated his F-key trick into our Quick Entry dialog.

For everyone interested in switching from iGTD to Things, Bartek also created an iGTD Importer you can use to transfer your data. You can download it from our Wiki.

Please also read the following article for more details on what is new in Things 1.2.

I’d like to close this article by thanking Bartek for all he already did for Things. He was instrumental for providing our AppleScript support in Things 1.1, making sure that everything was in place for the iGTD importer he has now provided for the 1.2 release. The Quicksilver, LaunchBar, and Google Search Bar plug-ins we released today are also his creation. Thank you Bartek!