Habemus Dialogum - We Have a Dialog

This article is about a single dialog. The dialog with which users will be able to specify the repeat settings of a recurring task.

When you set out to do something new, it is a good idea to have a look at what others in the field have done before. When we began to approach recurring tasks, we looked at iCal’s recurring events. We wanted Things to be as flexible and powerful as iCal. The corresponding interface in iCal also seemed well done. Naturally, we copied it. Here is an example: 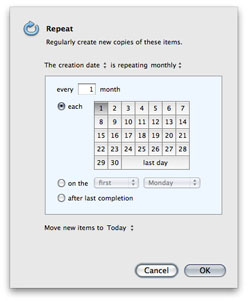 Not too shabby, is it? It seemed fine in theory. But after implementing and combining it with the underlying logic, it took us only minutes to discover that it didn’t work as expected. Not that anyone was able to tell exactly why. And that’s often the case when developing user interfaces. It just didn’t feel right. But how to improve it? We don’t remember how many mock-ups we passed to each other in the search for a solution. Here is a selection of them, together with the iCal inspired ones: 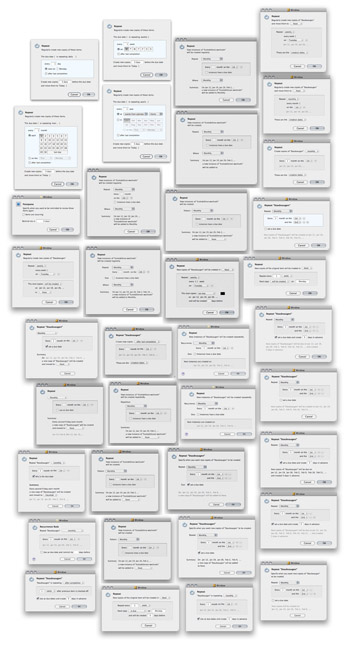 In hindsight it is much easier to tell why we didn’t like the previous approach:

To cut a long story short, we are still friends :), but we fought uncompromisingly, and now each one of us is satisfied with the result: 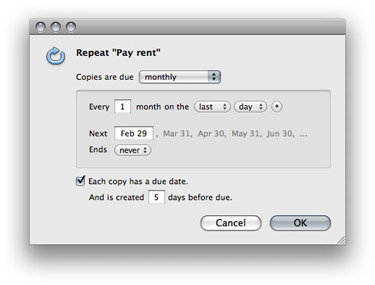 Note how the dialog slightly changes to reflect that dates are now meant as due dates.